Warning: "continue" targeting switch is equivalent to "break". Did you mean to use "continue 2"? in /customers/f/0/e/bestimmtverstimmt.de/httpd.www/wp-content/themes/Extra/includes/builder/functions.php on line 5941 Bad Salzuflen. 31 Oct.`14 | Bestimmt Verstimmt 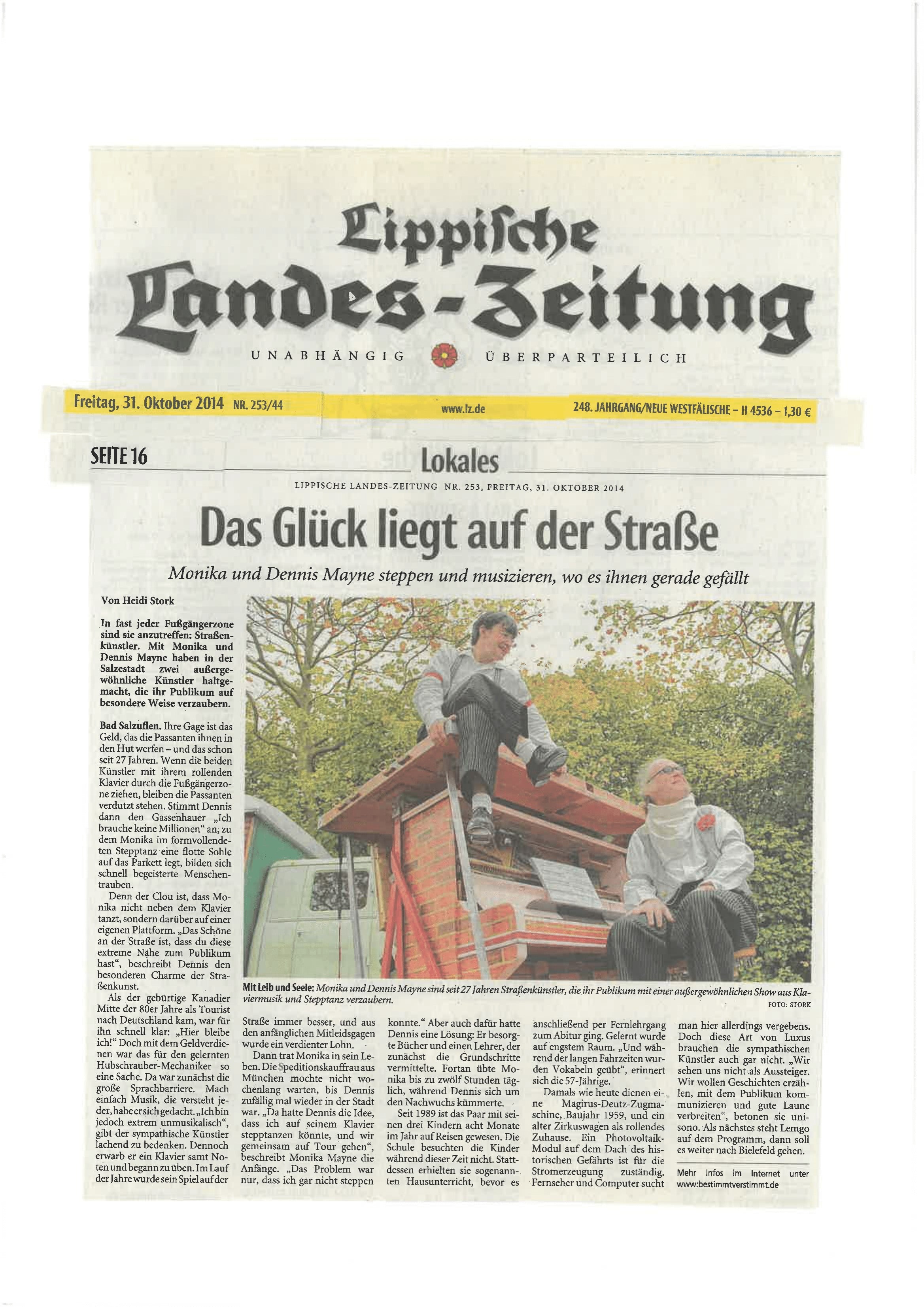 The Happiness lays on the Street.

Monika and Dennis tap-dance and make music where they like.

(Lower Foto) With body and soul: street performers since 27 years, Monika and Dennis Mayne enchant their audiences, performing an unusual show with piano music and tap-dance.

Bad Salzuflen. You can find them in almost every pedestrian zone: street artists. With Monika and Dennis Mayne, however; stopped two extraordinary artists in Salt City. They enchant their audiences in a very special way. Their fee is the money, which is tossed in their hat, from the passer-byers – since over 27 years . While the two artists push their rolling-piano through the pedestrian streets, most passer-byers freeze in their tracks, puzzled. When Dennis strikes up the golden oldie I don‘t need Millions, and Monika lays some iron on the stage, in perfect tap-dance manner; they soon attract an enthusiastic crowd.

The sting is that Monika DOESN´T dance NEXT to the piano. But ABOVE the piano, on her own platform. “Being extremely close to our audience makes the streets so beautiful for us”, explains Dennis. “It´s the special charme of street arts.”
When the born Canadian, arrived in Germany as tourist in the mid-eighties; he soon realized: “Here I‘m gonna stay!” But how to go about earning money wasn‘t yet clear for the man, whose profession was a helicopter mechanic. First of all, there was the big language barrier. “Maybe make music. That´s understood by everybody”, he thought. “But I‘m extremely un-musical”, confesses the sympathetic artist, with a smile. Anyway, he bought a piano,.. inclusive notes; and started to practise. As the years went by, his playing abilities, on the streets; became progressively better. The first drops in the hat, out of pity; developed into an `respectable´ income.
Then Monika entered his life. The forwarding-agent from Munich, didn‘t want to wait weeks, for him to return from his tours.           “So Dennis me up with the idea for me to tap-dance on top of his piano. Then, we could go on tours together!”, describes Monika.   “In the beginning, the only little problem was, that I couldn‘t tap-dance.“ But Dennis found the solution: He provided her with tap-dance books and found a teacher to introduce her to the basic steps. From then on, Monika practiced s up to 12 hours a day, while Dennis took care of the offsprings.

Since 1989 the couple was traveling, with their three children, for eight months of a year. During this time the children did home-schooling, with a corresponding course. Each receiving their high school diplomas. Learning was in tight quarters. “And during the long times of driving they practiced their vocabulary2, the 57 year old remembers. In the past, as now; they‘re using their Magirus-Deutz fire-truck, built in 1959. An old Circus-waggon is their rolling home. A solar-energy panel, on the roof, of the historic rig; supplies the electricity needed. Television is not to found here. But these forms of luxury are not needed by the sympathetic artists. “We don‘t consider ourselves as being drop-outs. We want to tell stories, …to communicate with an audience. And spread good vibrations”, both of them declare. Next City on their tour-plan is Lemgo, followed by Bielefeld.